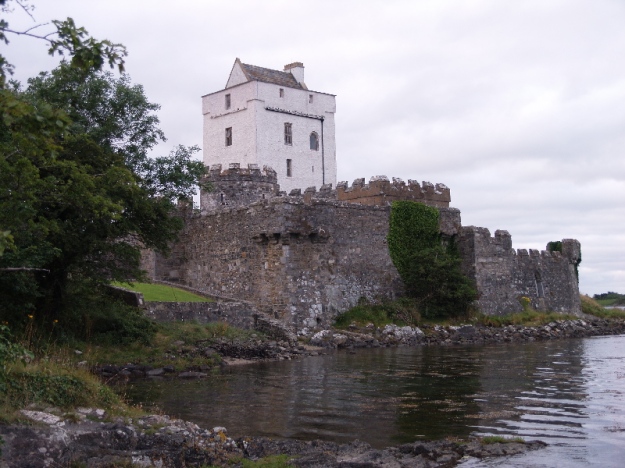 On the north coast of Donegal, on the shores of Sheephaven Bay stands Doe Castle. This castle was built in 1425, and remained occupied until 1909, but now sits empty. It is far from abandoned, however, as tourists flock to see such a well-preserved 15th century castle. And while opinion is divided over recent restorations, few can deny that the sight of the white castle on the lake is a striking one. Naturally, such a place has stories clinging to it, and the most famous is the story of Eileen MacSweeny and Turlough Óg O’Boyle.

“Wild are thy hills O Donegal, that frown and darkly rise

but none so dark as Maolmuire’s heart, in his castle hall at Doe.”

The Ballad of Turlough Óg is a poem by Donegal poet Niall MacGiolla Bhríde, who was born on Halloween 1861. He grew up in Creeslough, in the shadow of Doe Castle, and the story he put in the poem was already a famous folk tale at the time. It told of a handsome young man named Turlough O’Boyle, whose family shared a border with the MacSweeney Doe clan who lived in the castle. Turlough would hunt near the castle, on the territory of the Mac Sweeney Doe, and on his hunt he spied Eileen, the daughter of the clan chief Maolmuire MacSweeney. He courted her from a distance and won her heart, but when Maolmuire heard of the romance he was enraged, thinking Turlough not good enough for his daughter. He confined her to the castle and banished Turlough from his lands. In defiance of this, however, Turlough conspired to visit Eileen in secret. Unfortunately for him, on one of these clandestine visits he was (unknown to Eileen) captured by Maolmuire’s men. So it was that several days later, as she gazed out over the walls hoping to catch a glimpse of her love she saw her father’s men carrying Turlough’s body out to be buried. Overcome by grief she leaped from her tower window and was killed. Repenting too late, her father buried the two together. 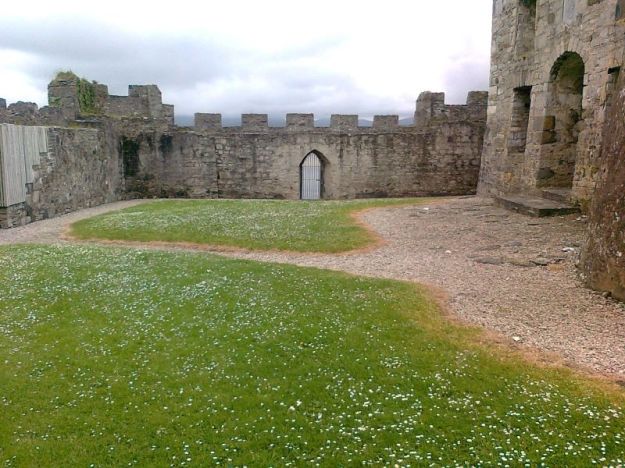 “In castle Doe, by the graveyard green, beneath the mould’ring soil

So ends the poem, although some versions of the story add embellishments like the two ghosts of the two lovers being seen on the lake, or a pair of rose bushes sprouting from the graves and intertwining together. It’s a tragic story in a classic mould, and has been set to music multiple times in arrangements both traditional and modern. Unfortunately it’s almost certainly without a basis in fact – but in a way the truth, and the fate of the MacSweeney Doe, is almost as tragic as that of the two lovers in the tale.

Doe Castle prior to restoration.

Now Turlough Óg O’Boyle was a real person, that’s true. And Maolmuire was real enough too – the last lord of the MacSweeney Doe. (Although the more proper title would be Maolmhuire MacSuibhne-dTuath. Or possibly Sir Miles MacSweeney.) Eileen could have been real – there are few women whose names are recorded in the annals, and if she had died too young to make a name for herself then she might not be recorded. What would have been recorded, however, is the battle between the O’Boyles and the MacSweeneys that would certainly have resulted from this. Furthermore, while Turlough Óg was real, his death does not match the myth – he was killed by Cromwell’s forces in the battle of Scarriffhollis, near Letterkenny, in 1650. Maolmhuire, meanwhile, had died around 20 years earlier. Now Turlough’s father was also called Turlough (Óg meaning younger), so the song could refer to him, but he is recorded as having received a land grant at the plantation of Ulster in 1610 (as did many of the dispossessed lords, Maolmhuire included). At that time, however, Maolmuire was no longer lord of Doe Castle – in fact, he only lived in the castle from 1596 to 1598, and in 1603 during the Nine Years War the English seized control of it, with it eventually being sold to an English officer. So it seems that what we have is a legend, though one with a kernel of truth. For as we’ve said, Maolmuire was real. And some of the locals, indeed, may have cursed his dark heart as a symbol of the divisions that doomed the Irish lords of old. 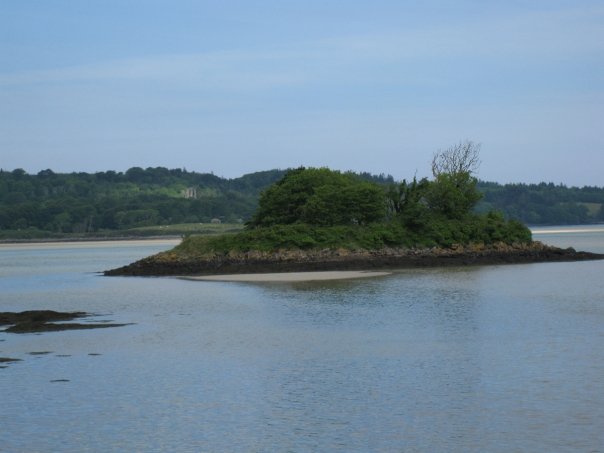 The view from the walls of Doe.

Doe Castle, or Caisleán na dTuath, takes its name from the surrounding area, as do the branch of the MacSweeney clan who built it. The area was vaguely know as Tuatha Toraighe, or the Territory of Tory, and then later as Na Trí Tuatha, or the Three Territories, but by this time was simply known as Na Tuatha. From it the local branch of the MacSweeneys became known as MacSuibhne dTuath – the MacSweeneys of the territories. They were a loyal part of the Kinel-Connell – Maolmhire’s father fought alongside Hugh McManus O’Donnell against Shane O’Neill, and his uncle (who succeeded his father as chief) was one of those who stayed loyal to Iníon Dubh when Domhnall Dubh O’Donnell rebelled. His uncle also attended at Hugh Rua’s inauguration, but he died in 1596 as the Nine Years War was beginning to get underway, and Maolmhuire succeeded him.

Castle Sween, the ancestral seat of the MacSweeney clan in Scotland.
Photo via Wikimedia Commons.

Maolmhuire means “Servant of Mary”, but despite the explicitly Catholic nature of his name Maolmhuire was actually on good terms with the English, and indeed Sir Conyers Clifford, the man who was in charge of Connaught for the English, was sure that he would side with them against Hugh Rua’s rebellion. This he did, but he was defeated and driven out of Na Tuatha and forced to seek asylum with Clifford. Clifford was killed in battle, but even without his protector Maolmhuire appears to have managed to stay afloat in the English camp, being knighted under the name of Sir Miles MacSweeney in 1600. (He never accepted a coat of arms, however, thus possibly showing that his commitment to this title was less than serious.) He may have felt that he was on shaky ground, however, and was captured making contact with Hugh Rua the same year. The English imprisoned him on a boat on Lough Foyle, but it appears to have not been that close a confinement, as he was able to escape with the aid of a prostitute he had persuaded them to let him bring aboard. After that, things become unclear, as he appears to have switched sides several times again, but in the end he was one of those who accepted a pardon in 1604. Though he lost his title he kept some land, and was not forced to flee in the Flight of the Earls. The castle at Doe, however, remained in the hands of the English. So it was that Maolmhuire, who went were the wind took him, was the last Lord of Caisleán na dTuath.

So there we are – the fictional tragedy of Eileen and Turlough Og, and the real tragedy of Maolmhuire, the chief whose lack of constancy led his clan to ruin. Given the choice, I think I prefer the fiction – the ghosts of the two lovers, dancing out on the waters of Sheephaven Bay, while the dark-hearted lord mourns too late is a cleaner and simpler story than the messy and sometimes contradictory world of reality. And in the end, it is the song that we remember as we stand on the walls of the castle on the shores of Sheephaven Bay.