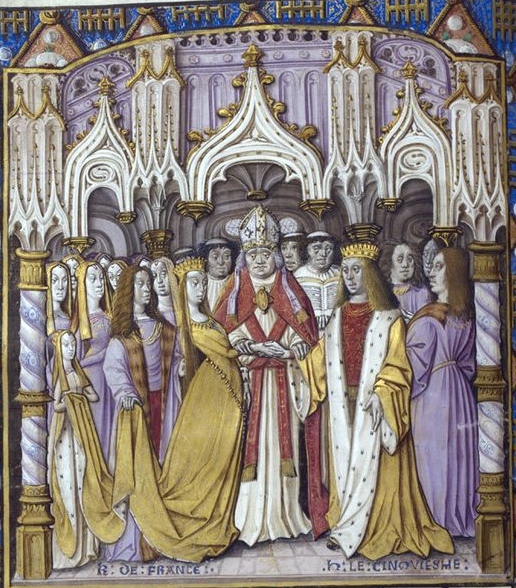 The marriage of Henry V and Catherine of Valois.
Artist unknown, drawing from pre 1494.

Twenty-three years after Richard II had been deposed as King, history seemed to repeat itself. Richard had come to the throne as a child-king, son of a popular war hero, and now the grandson of the man who deposed him was in the same situation. Henry VI was only nine months old when he came to power – the youngest ever person to become King of England. His father, Henry V, had defeated the French in the Battle of Agincourt seven years previously, and had subsequently taken the daughter of Charles VI, King of France as his wife, and been declared as heir to the French throne. The unification of France and England, a dream of English rulers since William the Conqueror, seemed to be finally in their grasp. Charles was ill, and seemed certain to die soon. However, it was not to be. Nine months after his son was born, Henry V contracted dysentery during a siege and died. Charles survived him by two months, but an infant couldn’t hold the two realms together, and Charles’s son (and rightful heir, by the French rule of succession) became the recognised King of France. 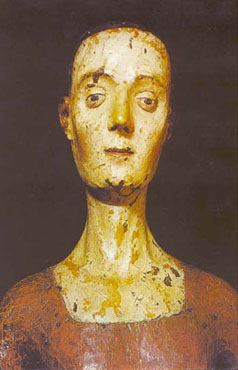 The effigy of Catherine of Valois in Westminster Cathedral.
It is based off a death mask, a cast of her face made after death.

As one might expect, the struggle for the Regency defined the early years of Henry VI’s reign. His mother, Catherine of Valois, was frozen out early on. She was young, and French, and had no friends in court. She was, in the game, a pawn rather than a player – still of marriageable age, and so dangerous to those already established in power. Edmund Beaufort, the Duke of Somerset, was rumoured to be making a bid for her hand, and in order to forestall this the Lord Protector, Humphrey the Duke of Gloucester, (one of Henry V’s brothers) “clarified” the laws around the remarriage of a dowager queen. Specifically, it was stated that any man who married her without the King’s permission would forfeit his lands and possessions (though his children would be considered members of the royal family). The kicker was that the permission could only be granted by the King when he came of age. Since the law was passed when he was six, that was still ten years away.

A contemporary sketch of Humphrey, Duke of Gloucester.

As a result, Edmund did not marry her – good news for Humphrey, as his main rival for control of the regency (following the death of his elder brother, John, who had been serving as regent) was another Beaufort, Cardinal Henry of Winchester. While the two men divided the court between them, Catherine married a Welsh servant of noble extraction named Owen Tudor. Since Owen had no lands to forfeit, there was no impediment to his marrying the queen, and nobody at the time realised quite how important that marriage would eventually become. Six years later Owen was imprisoned in Newgate for treason, and the following year in 1437 Catherine died in childbirth. Henry pardoned Owen following her death, while their two sons Edmund and Jasper were made Earls. The Tudor dynasty had begun. 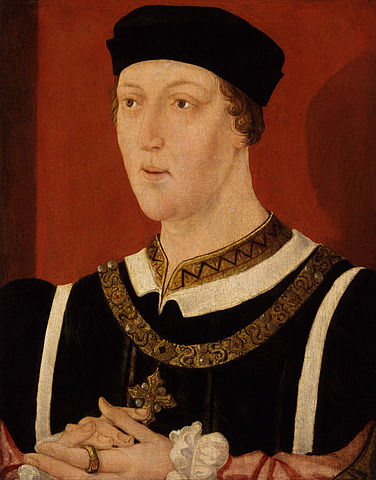 At around this time, the young king came of age and assumed power in his own right – bad news for his uncle Humphrey’s faction, as the mild-mannered king favoured the notion of peace with France. Humphrey found himself marginalised as Cardinal Beaufort and William de la Pole, the Duke of Suffolk, became the powers in the court. Also marginalised was the leader of the English forces in France, Richard the Duke of York, who was denied troops at a critical time in order to assist one of the Beaufort family – a slight he never forgave them for. Around the same time, Humphrey’s wife, Eleanor Cobham, was convicted of witchcraft and imprisoned, and though Humphrey was not implicated the scandal spelt the end of his power in the court.

Detail from “The Penance of Eleanor”, by Edwin Austin Abbey, 1900.

The final nail in Humphrey’s coffin was the King’s marriage. In order to appease the French, Henry was betrothed to Margaret of Anjou, the niece of King Charles VII of France. Instead of the King of France providing a dowry for Margaret, however, instead the English ceded territories to him to secure the match. William de la Pole negotiated the treaty, and simultaneously gained a great deal of both influence with the king, and hatred from the general public. He and the Beauforts soon used that influence to have Humphrey brought before the king, and charged with treason. The aging Humphrey died before he could be tried, among rumours of poisoning.

Portrait of William De La Pole, based on descriptions, by Thomas Tindall Wildridge, 1884.
De la Pole had the nickname “jacknapes”, which meant “monkey”.

The death of the childless King’s last uncle left Richard of York as his heir, but he was out in the cold at court, and got sent to Ireland, away from the center of power. In a clear sign of the way the wind was blowing, William de la Pole and Edmund Beaufort were made Dukes – a title heretofore reserved for members of the royal family. This did not go down well with the public, who associated them with the ongoing losses in France where the appeasement policy had failed completely. De la Pole was impeached by Parliament, and the king was forced to send him into exile. As he crossed the Channel, however, his ship was attacked and boarded by vessels of the King’s own fleet, led by a warship named Nicholas of the Tower. Who it was that sent these ships remains a mystery to this day, but they declared him a traitor, beheaded him, and tossed his corpse overboard.

De la Pole’s death did not halt the losses in France, and by 1450 the gains made by Henry V had been totally reversed. And the losses did not stop there. Soon, territory that had been in English hands for hundreds of years was lost to the encroaching French. Rebellions also simmered at home, and Richard of York returned from Ireland to try to restore some stability to the realm. His demands included the arrest of Edmund Beaufort, something that Queen Margaret managed to prevent. With Edmund still in place, and the Queen’s party strengthened by news of her pregnancy, Richard was once again left isolated. And then the word came from across the ocean – Bordeaux had been lost. The only English territory left on the continent was Calais, and beyond that all was French. At the news, Henry VI, King of England, sank into a catatonic state. His fugue was such that he did not even react when presented with his new son, Edward – a son that York’s supporters were beginning to spread rumours of actually being Beaufort’s. The Duke had allied himself with the Earl of Warwick, a rival of Edmund Beaufort, and the two were able to seize the regency. York became Protector of the Realm, the Queen was isolated, and Beaufort was imprisoned. The eve of war came when, on Christmas Day 1454, the King regained his senses. The stage was set. The Wars of the Roses were about to begin.