Throughout its existence, the Byzantine Empire had a reputation both for  decadence and for intricate intrigues and powerplays. Even today, the term “byzantine politics” is used to mean overly complicated and involved power structures, where a large number of shifting alliances must be respected, and the penalty for failure can be severe. But is the term justified?

The reputation of Byzantium arises from the views of Europeans of the time, as it is their writings that we have to go on. Historian Steve Runciman makes a very good point in one of his books:

“Ever since our rough crusading forefathers first saw Constantinople and met, to their contemptuous disgust, a society where everyone read and wrote, ate food with forks and preferred diplomacy to war, it has been fashionable to pass the Byzantines by with scorn and to use their name as synonymous with decadence”.

While true, this is not the only reason for this contempt. The Byzantines had a tendency to regard political power as something essentially transitive, that could be seized by any strong enough to wield it. (As anyone who has listened to the second half of The History Of Rome Podcast knows, this is a tendency they inherited from the Roman empire.) However the Europeans had much more stable (though not entirely stable) monarchies, thanks largely to much more restrictive power structures. Under the feudal systems used in Europe, the lords swore fealty to the King and his heirs. If someone else overthrew the king, those oaths were null and void. As such, therefore, kingdoms largely stayed within the purview of a single family. While usurpations and civil war were not unknown, a European country might have one every century – while Byzantium was fortunate if a single decade passed without a serious power struggle taking place.

Another reason for this contempt comes, oddly enough, from those who stood in opposition to such stable power. Liberal writers of the 18th and 19th century regarded Byzantium as the epitome of “absolute power in the hands of one man”, and it was often used as a parallel with similar systems (such as Imperial Russia) that still existed at the time. As such, those writers (not averse to colourful prose) labelled Byzantium as (in the words of 19th century Irish historian and liberal William Lecky) “without a single exception, the most thoroughly base and despicable form that civilization has yet assumed… a monotonous story of the intrigues of priests, eunuchs, and women, of poisonings, of conspiracies, of uniform ingratitude”. Georg William Friedrich Hegel (the influential German philosopher) described Byzantium’s history as “Rebellion on the part of generals, depositions of the Emperors by means or through the intrigues of the courtiers, assassinations or poisoning of the Emperors by their own wives and sons, women surrendering themselves to lusts and abominations of all kinds”. Strong stuff.

But just how accurate a portrayal is this? Everyday political life in Byzantium was all about factions. The noble families (the Komnenus, the Tzimisces and others) each vied for positions of power. The common people divided themselves along faction lines based on the colours of the chariot teams they supported (Blues versus Greens), with the leaders of those factions wielding considerable power due to the manpower they could command. (Chariot racing had replaced gladiatorial combat as the “circus” part of the “bread and circuses”, and it remained a fixture of Byzantine life up until the 13th century.) The most memorable divide in the city was the religious divide over Iconoclasm. This disagreement arose over the role of ikons (religious images) in worship. The Iconodules believed that religious images were a necessity for worship, as it allowed one to focus on the divine. Iconclasts, on the other hand, believed that the use of these images constituted idolatry. This led to ferocious civil war, with Emperors arising who believed in one view or the other, and being opposed by those who disagreed. In the end, the Iconodules triumphed, and ikons remain an important part of the Orthodox Church to this day.

For an example of how these imperial politics played out, consider the Empress Irene. The Empire had an official policy of iconoclasm in 780 when the Emperor Leo IV died, leaving his wife the Empress Irene as regent for his nine year old son Constantine VI. She was a known iconodule (as well as being a woman, a horror to some among the establishment), and so a conspiracy immediately arose to depose her and raise Leo’s brother Nikephoros as Emperor. She responded by having the conspirators exiled, and forcing Nikephoros to become a priest (which disqualified him from the succession). She later officially reversed the policy of the empire on ikons. As her son Constantine reached maturity, he discovered that his mother had no intention of relinquishing power, leading to the unique situation of the official ruler of the Empire having to rise up in revolt against his own regent – and losing. Irene forced the official oath of loyalty to thereafter include a pledge of loyalty to herself alone, but this was too much for the army, who declared Constantine as sole ruler. Irene’s power was sufficient that Constantine could not dislodge her, and she gradually formed enough of a power base that he was forced to flee the capital. Unfortunately for him, his attendants turned out to be in the pay of the Empress, and he was seized and blinded. Blinding was a common tactic in Byzantine politics, as a way to leave an opponent no longer a threat without taking on the sin or consequences of outright murder. In the case of poor Constantine however, it was an academic distinction as the wounds festered and he died several days later. Irene then reigned as sole ruler of the Byzantine Empire for five years, although she was not recognised as a valid ruler by many, including Pope Leo. The Pope claimed that this meant that the seat of Roman Emperor was vacant and crowned Charlemagne (allegedly against his wishes) as Roman Emperor, leading to the “Holy Roman Empire” appearing on the European stage. Irene, never one to miss a trick, sent a proposal of marriage to Charlemagne. His reply is not known. Finally, in 802 the nobles and eunuchs of the court had had enough. They de-throned Irene and raised the finance minister, another Nikephoros, up in her place. He forced her into exile, where she died a year later. He would reign for eight years, before dying in battle against the Bulgars and having his skull made into a drinking cup. One gets the feeling that Irene would have approved.

Irene’s story is hardly unique in Byzantine history. The imperial sisters Zoe and Theodora intrigued against each other for decades, forcing each other into convents, blinding or poisoning rivals and even reigning side-by-side as co-Empresses for eight years, first together and then in combination with Zoe’s third husband, Constantine IX – who had his mistress ensconced in the royal family as well! Equally decadent was the relationship of Emperor Michael III and the man he crowned as his co-emperor, Basil I. Michael’s marriage was childless, but his mistress Eudokia had become pregnant. The solution he adopted was to marry her to his favourite courtier Basil, and then make Basil co-Emperor, so the child would be a legitimate heir to the throne. He didn’t cease his relationship with Eudokia, however, but kept Basil happy by retrieving his sister from a monastery and making her Basil’s mistress. Basil had his own plans, however, and he and his supporters assassinated Michael. He met a grisly end – both his hands were cut off before he was finished off with a single sword-thrust to the heart. 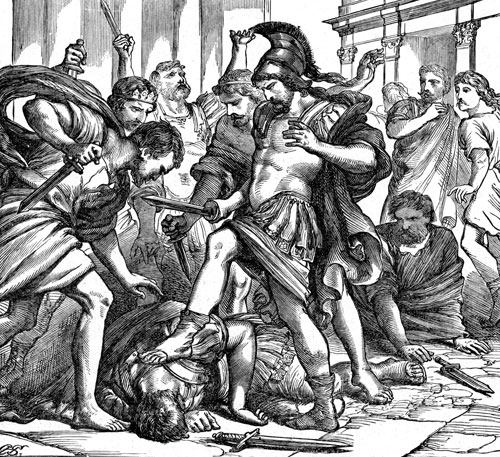 Michael’s fate was not unique – failure in the game of politics usually came with fatal consequences. It was very common for deposed Emperors to be strangled in prison, if they were not killed while being deposed. Leo V was cut down in a chapel by armed men disguised as monks, and his four sons were castrated to keep them from the throne – exactly the treatment Leo had meted out to the sons of his predecessor as Emperor. Emperor Nikephoros II was a capable ruler, but the vow of chastity he swore after his first wife’s death saw his second wife organise a conspiracy to oust him from power. She hid assassins in her bedchamber and sent them to his room at night, where they removed his imperial powers, along with his head. (His epitaph reads “You conquered all but a woman”.) The most undignified end may be that of Constans II – a chamberlain infuriated by his relentless and unfair taxation to finance his military adventures snuck into his bath chambers and bashed his head in with a soap dish.

Given all this, it is hard to dispute the claims of the Europeans that the Byzantines were given to intrigue and violent politics. However this was exactly the way things had operated in Rome for hundreds of years (a notable blind spot, due to the European idealisation of the Roman Empire), and indeed Byzantium itself survived for over 800 years regardless of this turmoil. The politics may not be pretty, but the no-holds-barred nature of it meant that any ruler who did not give results was swiftly replaced, while those who gained power were those most inclined to wield it. Indeed, it’s important to remember that this intrigue and double-dealing was confined to the top rungs of society – the average Byzantine was industrious and loyal. Still, I think we can be glad that modern politics, bad as it is, no longer follows the practises of Byzantium.