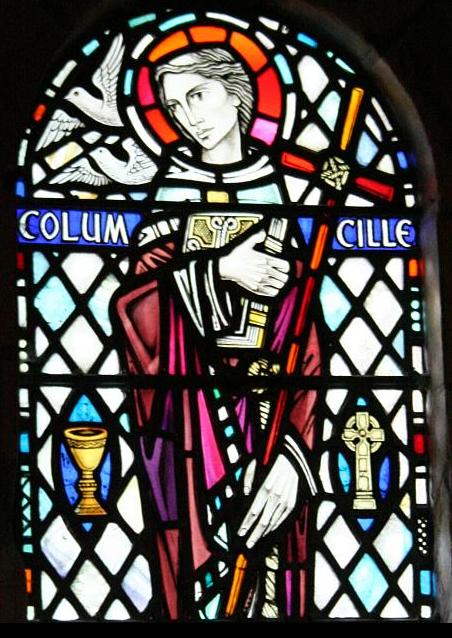 The patron saint of Donegal goes by several names. He was born as Criomthain, a prince of the Ui Neill. To the Scottish, he is known as Columba, the missionary who brought Christianity to the pagan North. But to his native county, he is Columcille – the church dove. No peaceful dove was he though – he is said to have slain monsters, and definitely had the death of men on his conscience, before he went to Scotland to “save as many souls as he had doomed”. A century after he died, a bishop named Adomnan wrote the story of his life. A thousand years after he died, a king named Manus O’Donnell wrote the story they were telling then. And a thousand years is long enough to turn a man into a legend.

Columcille was born in 521AD to royalty, the son of a prince of the Ui Neill clan and a princess of Leinster. Manus tells us of prophecies before his birth, and says that a vision of an angel told his mother to give birth on a particular flagstone, which happened to be at the bottom of Gartan Lake. Fortunately for her, the flagstone miraculously floated to the surface, where they were able to bring it ashore. Manus also tells us that she gave birth not only to the saint, but also to a magic red stone that cured ailments. This may be related to the famous white clay of Gartan, however, which is reputed to ward off vermin and housefires, and which is still gathered by the O’Friel family, the guardians of the clay ever since their ancestor Tearmair O’Friel sanctified it. 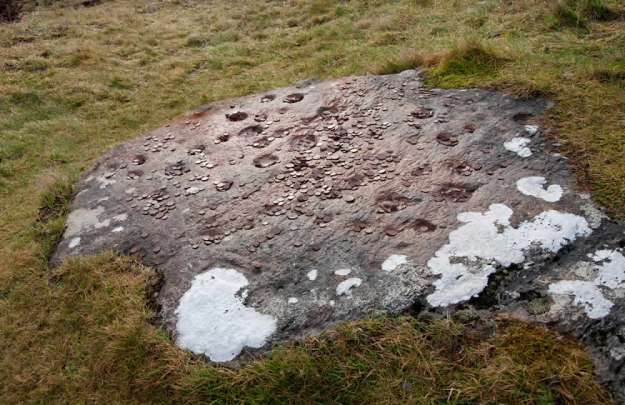 Leac na Cumha, the Stone of Sorrows.
Columcille is said to have been born upon this stone.
It is also said that he slept upon it the night before he went into exile.

Manus gives us many stories of the childhood of Columcille – that a light surrounded him as he slept, that a stone on which he played was imbued with the essence of chastity and renders anyone who stands on it sterile, that he raised his foster-father from the dead and conversed with angels – basically a normal Donegal childhood, really. What we do know is that Columcille became a monk at a young age, and by 23 was already a force to be reckoned with, travelling through Ulster and founding monasteries. One that he founded was Doire, which later became the city of Derry. Another was Kells, where the great illustrated bible the Book of Kells would be produced. It is also during this era that the legends around him began to take shape. 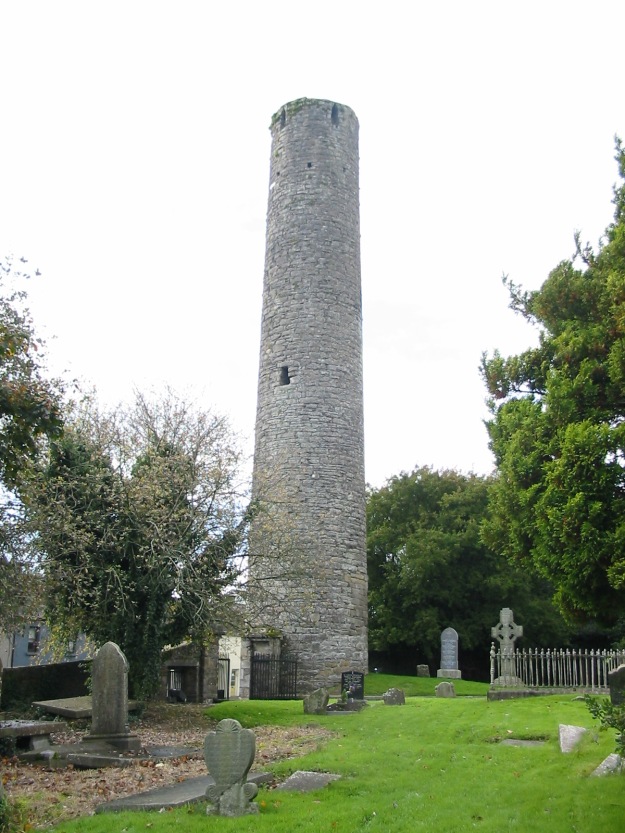 The round tower at Kells, built over a thousand years ago.
Picture via Wikimedia Commons.

Manus gives us several of these, though my favourite is not among them. Of those he does give us, several concern Columcille cursing fishermen who refuse to give alms, turning their fish to stone and rendering entire lakes barren. The most memorable to me is the story of how a scholar was having an affair with the wife of a priest. (Celtic Christianity encouraged clerical chastity, but did not require it.) When the messenger from the wife appeared, Columcille grabbed the scholar and said that the messenger was the Devil himself, seeking to seal his damnation. He proved this by compelling the messenger to reveal his true appearance, terrifying the scholar into swearing off “that sin” for life, before binding the evil spirits to “tell him whatsoever he asked of them”. 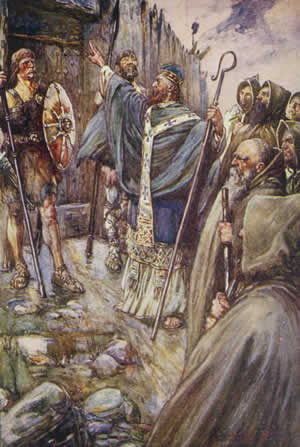 Columcille, later in life, demanding entrance to a fort.
Picture via Wikimedia Commons

My favourite legend of Columcille is the story of when a local chieftain asked him to help kill a dreadful beast named Suileach (the Many Eyed). Columcille and the chief set off together to slay the creature, but when the creature burst from its cave, the chieftain lost heart and fled. Columcille fought alone, cutting the beast in half. However the tail came back to life and wrapped itself round him while the head crawled towards him, but Columcille was able to break free and stab the beast in the head. His blood now thoroughly aflame, he pursued the craven chieftain meaning to kill him as well. The chieftain, seeing no chance of fighting the warrior saint, agreed to submit to his fate if Columcille would wash the monster’s blood from his blade so it would not mix with his. This Columcille did, but as the blood streamed down the river, so his rage went with it, and he spared the chieftain. The legend claims that from this the river Swilly gets its name – probably not true (it’s generally believed to be because of the pools, or “eyes”, at its source), but a good story.

The strangest part of Manus O’Donnell’s book, however, is the prophecies attributed to Columcille. One of the more unusual ones is when he speaks of the Day of Judgement, when St Patrick shall lead all Christian Irishmen, saints and sinners alike, to heaven. He will send a messenger ahead of his host to ask Jesus what tidings he has, and Jesus will respond by asking Patrick to leave the evildoers behind. Patrick will refuse this, invoking the laws of hospitality (essentially saying “That’s no way to talk to a guest”). The messages between the two go back and forth, Patrick reminding Jesus of divine visitations when he was given the right to pass judgement on the Irish. Eventually, Christ relents and allows Patrick’s host to come to heaven, although Columcille is interrupted by the lunch bell before he can say what transpires next.

Ben Bulben, site of the battle of Cul Dreimhne.
Picture via Wikimedia Commons.

Of course, every saint has legends. The historical events of Columcille’s life are no less strange, however. He was loaned a book of psalms by St Finian, and had his monks make a copy of it before he returned it. In what was possibly the first ever lawsuit over copyright, St Finian brought the matter to the High King, claiming ownership of the unauthorised copy. The king, Diarmait Mac Cearbhaill, ruled in favour of St Finian, comparing the situation to that of a man who had loaned someone a pregnant cow with the phrase “To every cow its calf, and to every book its copy”. Columcille was not happy with the judgement and used his influence with the Ui Neill to send them to war with the High King. Legends of the battle have the High King reverting to pagan ways and using druidic magic against the Ui Neill, but this is almost certainly propaganda. What is certain is that the Ui Neill gained the book back, and named it An Cathach, or The Battler. They built a special silver case to hold it, and brought it into battle for centuries as a standard of victory.

The silver case in which the Cathach was brought to war.

Columcille, meanwhile, apparently horrified at the slaughter his temper had brought about, swore to save as many souls as had been slain in the battle. After spending one night sleeping on the flagstones of Gartan where he had been born, he left Ireland for Scotland. There he founded a monastery at Iona and converted several Scottish kings (as well as, legendarily, driving off a mysterious monster in Loch Ness). He swore never to see nor set foot on Irish soil again, a promise he kept in the one occasion he returned by being blindfolded and having a Scottish sod strapped to each foot. But the land he left behind never forgot him, and he would be revered as one of the three great saints of Ireland. (And since the other two were St Patrick who was a Roman, and St Brigid who was fictional, the only Irish one among them.) A warrior saint, a man of war and peace. A fitting patron for the contradictory county of Donegal. 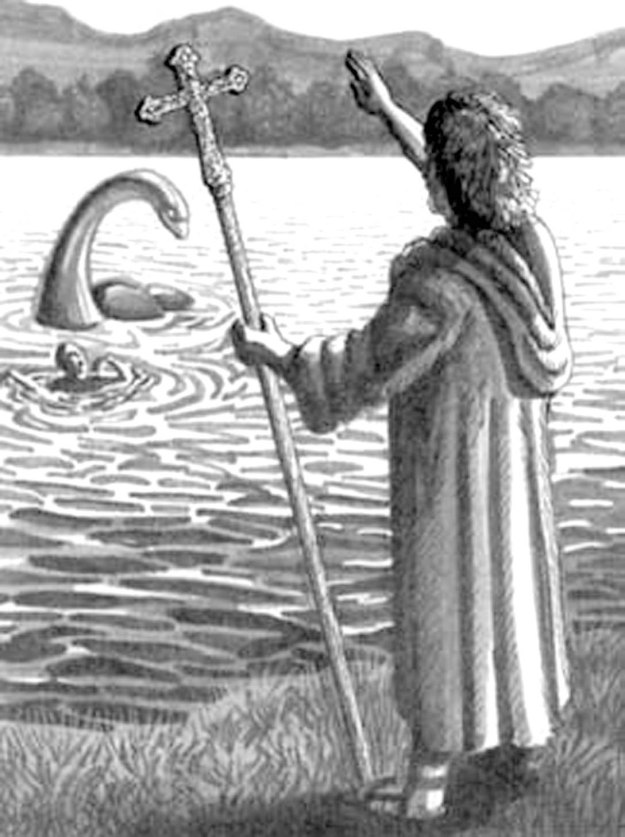 Saint Columcille driving the Loch Ness monster away from one of his monks.