The position of cursing stones in Irish folklore is poorly-documented, perhaps due to their malevolent nature. While the early Celtic Christian church absorbed many of the pagan beliefs of old Ireland, that process was a piecemeal one. The sacred wells became holy wells easily enough, just as the acts of pagan heroes became the miracles of saints. However what could be considered the polar opposite of the sacred wells, the cursing stones, were not so palatable to Christianity. The notion of uttering curses to damn ones enemies was anathema to the views of Christianity, and so the stones were not part of the canon of the Celtic church, that strange semi-heretical beast that evolved in medieval Ireland before being returned to the standard Catholic Christian format by the Norman ascendancy over the island.

A Bullaun at Chapeltoun in Ayrshire.

The cursing stones themselves were simple enough, and indeed several survive to this day – one or more round stones, resting in depressions on larger stones. They are of Neolithic origin, and are considered to be a subset of the “cup-marked boulders” found across Europe. Sometimes known as bullauns (from the bowl-like depressions in which the stones rested), a common Christianisation of them was to remove the stones and use the depressions to hold holy water. Some still retained their stones and their cursing legend, however, and it is one such stone that concerns us today.

That is, if we can be sure which stone we’re actually talking about. While the most famous bullaun on Tory Island is commonly referred to as “Cloch na Mallacht” (the Cursing Stone), and placed at the northern end of the island next to a lighthouse, one other candidate is a bullaun found at a ruined church named Móirsheisear, or the Church of the Seven. The church gets its name for being the burial site of seven victims of shipwreck, six men and a woman. Originally the seven were interred in a single grave, but the next morning the woman’s corpse was found on top of the grave. This was taken by the islanders to mean that she was neither kin nor wife to any of the six men, and so rebelled at sharing their grave. She was thus interred in a grave of her own, where she was content to stay.

We do know that there was at least one cursing stone present on Tory Island before the incident of the HMS Wasp. The Edinburgh naturalist James Sconce wrote in the Transactions of the Edinburgh Field Naturalists & Microscopical Society 1902-1907, while speaking of a visit to Donegal prior to 1884:

“…Tory Island, off the Donegal coast, where there is a stone which, if it could be turned, and the name of Mr Adair repeated over it, would have been sure to bring about his death within a year.”

The “Mr Adair” of which they speak is John George Adair, a Scotch-Irish businessman, and owner at the time of Glenveagh Castle in Donegal. He had made himself a hated figure in the county with his decision, in 1861, to evict 47 families from his lands and demolish their homes in order to “beautify his view”. Small wonder that one might wish to turn the malice of the cursing stones against him. 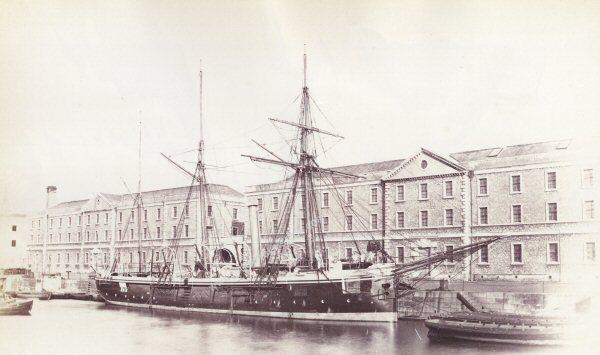 It was evictions as well that saw people’s ire turn on the HMS Wasp more than 20 years later. The ship had been built in 1880, and taken into the Royal Navy in 1881. The usual use that it saw was transporting officials to and from the islands off the northwestern coast, although it had also been responsible in 1883 (under charter to the Quakers) for transporting urgently needed seed potatoes to Inishtrahull Island, the most northerly island off the coast of Ireland. Inishtrahull held a special place in the hearts of Irish emigrants who left from Derry for New York, as the light of the lighthouse on the island was for many the last glimpse of Ireland they would ever see. And it was to Inishtrahull once more that HMS Wasp set out on the 21st September 1884, although with a much less welcome cargo – bailiffs, whom it would first be collecting from Moville in Donegal, who were to evict those islanders who had not been paying their rent. In truth, the entire island was almost certainly in arrears, feeling themselves too remote for their distant landlord to care to act. But that distant figure’s patience had been exhausted, and an example was to be made of the islanders of Inishtrahull. Fate, however, had other plans.

It is uncertain exactly what happened on board HMS Wasp in the early hours of the 22nd of September as it approached Tory Island. The senior officers were asleep, leaving more junior crewmen to man the boat – possibly not the wisest of choices, given the difficulty of the course, but it was one the ship had sailed many times before. It may have been the inexperience of these younger men that saw them plot a different course from the standard – sailing between the island and the mainland, rather than around the outside of the island. Also unusually, the ship’s boilers were not in use, leaving it devoid of steam power. This was not a crippling problem, as the ship was perfectly capable of travelling entirely under sail, but it left the crew with no ability to perform fine manoeuvres in the case of an emergency. The only thing we can say with any certainty is that at 3.45am the ship ran aground on the rocks surrounding the island.

The ship sank rapidly, and within less than half an hour only the mastheads remained above water. Of the 58 crewmen on board, only six survived the wreck, climbing the rigging as the ship sank and then struggling ashore. There they were sheltered by the islanders until they could be picked up four days later by the Wasp’s sister ship, the HMS Valiant, which took them to Rathmullen on the shores of Lough Swilly. It was doubtless the tragedy of this large-scale loss of life that led the local priest, a Father Michael O’Donnell, to respond so harshly to the claims of the self-styled King of Tory that he had engineered the wreck with the cursing stone.

The title of King of Tory is an odd one. While the legendary king of the island, Balor of the Evil Eye (who I may have referenced elsewhere), was hardly a figure of veneration, still the island retains the tradition to this day of having an elected King of the island. The current king, artist and musician Patsy Dan Rodgers, has turned the island into a haven for traditional Irish artists, and was recognised by the islanders both for this and for his campaign against the government’s plans to resettle the islanders after storms in 1974 cut them off from the mainland for two months. The King of Tory in 1884 was a much less venerable figure. Little is known of him save for his name, which was Heggarty, and his reputation, which was poor.

The story has it that he claimed to have loosed the curse of the stones upon HMS Wasp in the belief that it was coming to evict the Tory Islanders (a not implausible belief, as they were over £2000 in arrears, and had also refused to pay their rates). While Father O’Donnell (a noted Fenian) had been a supporter of the islanders in their refusal to pay the rent he thought unjust, either the pagan basis of Heggarty’s claims or his distaste for the glee the man showed over the deaths of the sailors enraged the priest. He is said to have taken the cursing stones from their buallan and thrown them from the cliff that overlooked the wreck of the Wasp. (One could imagine that he might have threatened to send Heggarty after them if he repeated his claims, but that is just my own personal touch on the tale.)

The naval court of inquiry on the wreck of the Wasp found no single crewman to blame, but simply that “want of due care and attention” had led to her wreck. The islanders of Inishtrahull, meanwhile, were reprieved from eviction, and remained on the island until 1929, when failure of the local fishing led the islanders to relocate. Tory Island remains inhabited to this day, although the wreck of the Wasp was removed and sold for salvage. And the stones, whether they were hurled from the cliff, buried or otherwise hidden, have never been seen since.

4 thoughts on “Tory Island – HMS Wasp And The Cursing Stones”