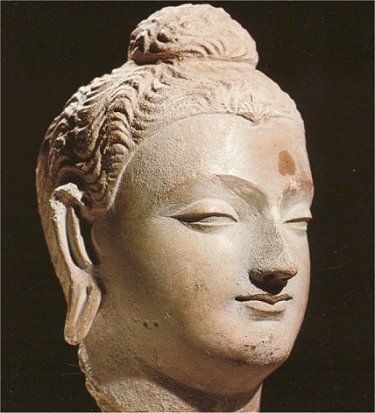 In the year 230BC, one third of the human beings living on the planet Earth owed allegiance to one single man. HG Wells wrote of him that his name “shines, and shines, almost alone, a star”. Some legends name him as a demon, others as a saint, and still others as both. He was Ashoka Maurya, Ashoka the Great, and while Rome was still in its infancy he ruled more of humanity than any other man would ever claim. He was the greatest leader of the Maurya Empire, a name unknown to most who live in the West, though familiar to most who now live where his empire once reigned. This is the story of the first time there was an India.

A statue of Chandragupta at the Laxminaryan Temple in Delhi.

As with many great empires, the Maurya Empire was built on the ruins of a previous civilisation, and in this case it was the collapse of the great Alexander’s empire that gave the Mauryan dynasty greatness. This dynasty was founded by Chandragupta Maurya, who is considered the first man to create a unified Indian nation. His ancestry is a matter of some debate – some stories have him as the illegitimate son of a prince of the Nanda family and a maid named Mura, others paint the Maurya as a migrant tribe, with Chandragupta as the son of the chief, abandoned after his father’s death by reprobate uncles. He was raised by a cowherd, and became the indentured servant of a hunter, until he was spotted by a Brahmin scholar named Chanakya.

Chanakya, godfather to the Empire.

Chanakya had been insulted by the King Dhana Nanda, and had sworn to destroy his empire. He educated the young Chandragupta in military arts, and Chandragupta soon led a band of mercenaries and, more importantly, had developed a formidable intelligence network. He channeled the people’s resentment at being a Macedonian tributary and soon drove the country to the brink of civil war, bribing the Nanda generals into defecting and possibly orchestrating the death of the heir to the throne, before defeating the Nanda army and forcing the king into retirement. Chandragupta assumed the throne, and Chanakya had his revenge. (Although the fact that the Greek texts that speak of Chandragupta do not mention Chanakya lead to some speculation that he was a fiction, or a later figure who was conflated with Chandragupta’s myth.)

Alexander the Great conquered most of the known world, and left a chaos in the wake of his death that many would take advantage of.

The splintering Macedonian empire had left chaos among Alexander’s generals, who fought bitterly for fragments of the empire. India was ruled by Eudemus and Peithon, but both fell victim to the vicious infighting among the Macedonians. Peithon died in the Battle of Gaza, slain by Ptolemy, who would found the Ptolemaic Dynasty in Egypt. After he departed India, however, his territories fell victim to uprisings orchestrated by Chandragupta, who swept in to seize them. Seleucus, the founder of the Seleucid Empire and another of Alexander’s generals, attempted to expand into India, but Chandragupta resisted fiercely, and actually conquered as far as eastern Afghanistan. When he died in 298BC, his empire included all but the southernmost portions of modern India, and his son Bindusara made further conquests.

The Empire Ashoka would inherit. The kingdom on the eastern edge is Kalinga. Image via Wikimedia Commons.

It was Ashoka, however, who would push the Empire to its greatest extent. The entire peninsula was under his sway, save for the Tamil kingdoms of the south, who managed to maintain their independence through diplomacy. Ashoka was not his father’s designated heir, but his brother Sushim antagonised the ministers, and Ashoka managed to take power. It is said that he killed his brothers, although this may be a fabrication of later texts. Ashoka converted to Buddhism after he conquered the kingdom of Kalinga, and the stories would have it that the carnage of the battles involved were too much even for his hardened heart to bear. Ashoka had created a torture chamber known as Ashoka’s Hell, which appeared from the outside as a beautiful palace. None who entered the palace ever left, however, as they would be tortured to death by the emperor’s executioner Girika. A Buddhist monk named Samudra was captured in the palace, but his inner peace left him immune to the torture and his miracles convinced Ashoka to convert. The man of war became a man of peace – though not, of course, until after visiting upon Girika the same fate he had given to others.

Ashoka’s Hell is generally described in the legends as modelled after the Buddhist hells.

Ashoka was to be succeeded by his son Kunala, but Kunala was ineligible for the throne as he was blind. His father’s youngest wife, Tishyaraksha, who had tried to seduce him and failed, tricked Ashoka into ordering Kunala to blind himself (which cost her her life when her duplicity came to life). Kunala is said to have entered his father’s court disguised as a minstrel, and demanded his birthright, not for himself but for his son Samprati. Samprati was too young to succeed, but he was declared the heir after his cousin Dasharatha. When Ashoka died, Dasharatha became emperor, though half of the kingdom may actually have gone to Samprati, and when he died without an heir, Samprati reigned. Neither reigned longer than ten years, however, and this began the succession of short-lived rulers that so often signal the decline of a great kingdom. Fifty years after the death of Ashoka, the emperor Brihadratha was assassinated by his chief general, Pusyamitra Sunga, during a military parade. The empire, which had shrunk considerably in the last fifty years from its height, had fallen.

So significant a find was the original Lion Capital of Ashoka that the first museum in India was created to house it.

The Maurya empire, at its height, was the greatest power in the world. Yet it was, in the end, too large to sustain itself. Without a powerful leader, the separate identities of the kingdoms they had welded together soon reasserted themselves, and the great empire faded away. It would be over sixteen hundred years before the land would be reunified by the Mughals, and another two centuries after they fell before modern India was born. But the legacy of Ashoka has not been forgotten. His symbol, the Lion Capital, has become the symbol of modern India. Two thousand years later, though his empire has fallen, Ashoka lives on.

The Sanchi Stupa, the oldest surviving structure in India, was built by Ashoka the Great.

1 thought on “The Maurya Empire”