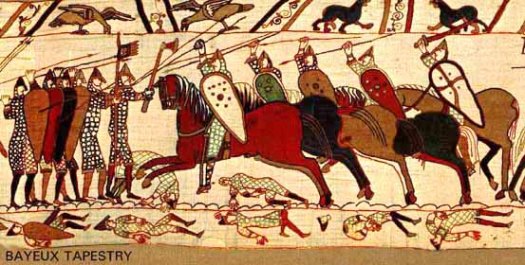 It is a generally held fiction among the English that their history began in 1066. This is, of course, immediately refutable – William the Bastard (later, and more acceptably, styled William the Conqueror) claimed his cassus belli for war as being that he was the rightful heir to the English throne – thus showing that there was indeed an English throne before he sat upon it. However, for the purposes of this history 1066 is significant as it marks the last time that a war was fought between distinct national powers for control of England. Vikings, Normans and Saxons faced off for the control of the newly unified kingdom, and in the end it was William who stood on top of the heap. All kings hereafter would claim William as the starting point of their right to rule, and in English history this marks the end of the so-called Dark Ages. No longer would England be conquered by external national powers. This is not to say, of course, that England would never be conquered, simply that when it was, it was by England. The English nation was born, and the English civil wars could begin.

It would not be long until the first such civil war would erupt. In a way, it is not surprising. While William bore the title of Duke of Normandy, it is a mistake to think of him as “King of the Normans”. In fact, while William was conquering England other Normans were establishing kingdoms in Sicily and Naples. William’s position put him on top of the heap, but the heap was a fractious one. Less than ten years after his conquest of England, things came to a head when the daughter of his cousin, William Fitz-Osbern fell in love.

William the Conqueror
(No picture of William Fitz-Osbern survives.)

William Fitz-Osbern was not only William’s cousin, but had also served as one of his regents before he came of age. After the future Conqueror began to rule in his own right, Fitz-Osbern became one of his closest advisors, and was a pivotal figure in his efforts to convince his earls to invade England with him. After the conquest he was first given charge of the Isle of Wight, and later on more earldoms in the more troublesome parts of England, the King trusting him to bring them under control. However his downfall came when the widow of the Count of Flanders offered him her hand in marriage if he would defend her county and her two grown sons from the evil intentions of her late husband’s brother. Fitz-Osbern could not resist the chance to play hero and win such a prize, but unfortunately the army led by Arnulf (the widow’s son) was surprised by his uncle’s forces before he could organise them, and both Arnulf and William Fitz-Osbern were killed in 1071. 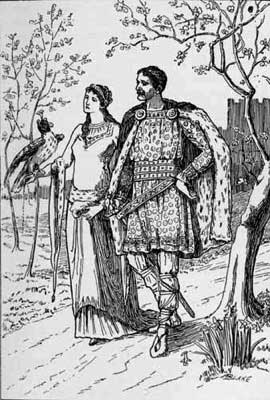 Emma and Ralph.
Woodcut from The Siege of Norwich Castle

William Fitz-Osbern’s daughter Emma was twelve years old when her father died on the fields of Flanders. In 1075, at the age of sixteen, she wished to wed Ralph de Guader, also known as Ralph de Gael. Ralph was the lord of both Gael and Montfort in Britanny, and was also the Earl of East Anglia (consisting of modern Norfolk and Suffolk). His marriage to Emma would unite his house with that of her brother, William Fitz-Osbern’s heir Roger de Breuteil. This would have combined the two largest holdings in England and posed a serious threat to William I’s new throne, so it is not surprising that he forbade the match. This may have been the final straw, or it may have accelerated the two Earls’ plans. Regardless, they held the wedding anyway (in open defiance of William, who was absent in Normandy at the time), and then rebelled. (It is from this wedding that the revolt gets its other name – “The Bridal of Norwich”.)

The two managed to convince the Earl of Northumberland, Waltheof, to join their rebellion – a decision that worked out badly for all concerned. Waltheof was a somewhat tragic figure, who has assumed a greater importance in death than he had in life as the last Saxon earl in English history. Waltheof was originally educated to become a monk, but the death of his elder brother made him his father’s heir. He became an earl in 1065, and submitted to William after Hastings, being allowed to keep his holdings. William, in fact, seemed fond of the man. Even though Waltheof had briefly defected to join a Danish invasion that included Eadgar Aetheling, the last surviving member of the Saxon royal family, William still forgave him and even gave him his own niece in marriage. Perhaps it was this memory of his last attempt at rebellion that led Waltheof to immediately regret his decision. He first went to Lanfranc, Archbishop of Canterbury, and let him know about the nascent revolt. Lanfranc immediately tried to dissuade the other rebels, and after he failed to do so excommunicated them. Waltheof, meanwhile, travelled to Normandy  and confessed directly to William, who immediately returned to move against the rebels.

Odo on the Bayeux Tapestry, recognisable by his famous club.
Source: Wikimedia Commons

Lanfranc was not the only churchman to plague the rebellious earls. Three warrior bishops left their plans in disarray. First the Saxon bishop Wulfstan (later Saint Wulfstan) raised the militia (or fyrd) of Worcestershire, and cut off Roger’s forces from joining up with Ralph’s, and then the Norman bishops Odo (half-brother of William) and Geoffrey of Montbray led the royal army (in William’s absence) against Ralph. (Unlike Wulfstan, these two were hardly saintly. Odo would later be tried for corruption, while Geoffrey declared that all captured rebels should have their right foot cut off.) With his forces divided, Ralph was forced to retreat first to Norwich, and then (leaving Emma to defend the castle) across the sea to Denmark to seek reinforcements. While he did return with 200 ships, they returned after William had managed to bring his full forces to bear, and were not able to defeat him.

Emma managed to hold Norwich Castle until she could negotiate terms for herself, Ralph and her followers in the castle – while their English holdings were seized they were permitted to leave the country in peace and go to their holdings in France. There Ralph and Emma lived until they joined the First Crusade in 1096, where they both (along with one of their sons) perished. Roger was less fortunate – he was deprived of all his lands and sentenced to perpetual imprisonment, although he was released on William I’s death in 1087. After his release he married a minor Norman noble’s daughter, and became lord of the village of Much Marcle in Herefordshire. The least fortunate was the unfortunate Waltheof – despite his confession (and Lanfranc’s entreaties on his behalf), William was not in the mood for giving second chances. Waltheof’s wife Judith, niece of William, also denounced him as an active mover in the conspiracy and sealed his fate.

Waltheof Commemoration Window in the Great Hall in Winchester.
Photo via A Clerk In Oxford

Something odd happened at Waltheof’s execution, however. As he knelt, waiting for the blade, he burst into prayer. The executioner did not wait for him to finish the prayer, but struck off his head mid-sentence. The head, it was claimed by those present, distinctly finished the prayer with “But deliver us from evil, Amen”, after it had been severed. The body was interred in a nearby chapter-house, and sixteen years later was moved into the church – but the men who moved it claimed the body was intact, and moreover that the head had been re-attached. Given this clear evidence of sainthood, it was not long before the tomb of the last Saxon earl became a popular site for pilgrimages and the location of several healing miracles, though he was never actually made a saint – the canonisation of a convicted Saxon traitor would clearly have been unpopular with the (still Norman) rulers.

So ended the first English Civil war, over in only a few months. Ironically, it left William in a much more secure state than before it had begun – once the war ended he had managed to eliminate several powerful rivals, and had shown the rest of his court that he was not to be toppled easily. Later civil wars would not end so neatly.