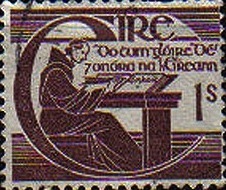 In 1632, a Franciscan friar in the monastery at Donegal named Mícheál Ó Cléirigh began to compile a history of the island of Ireland. He was assisted by his brother Cú Choigcríche Ó Cléirigh, his friend Fearfeasa Ó Maol Chonaire and his fellow priest Peregrine Ó Duibhgeannain. (Oddly, before he took holy orders and changed his name, Peregrine was also called Cú Choigcríche – a name with no modern equivalent meaning “foreign hound”.)  The book they created was a collection of several lesser histories, and became known (after the four of them) as the Annals of the Four Masters. It has been translated several times, but the most famous is that made by John O’Donovan, a professor at Queen’s University Belfast, in 1856. He split the work into six volumes of equal size, though naturally the Masters covered the more recent years in greater detail. As such, the sixth volume covered the previous 27 years, the fifth covered 87 years, the fourth covered 117 years, the third covered 200 years, the second covered 268 years, and the first? The first is the one we’re going to discuss today, because the first covered 3854 years, from the Great Flood (which they placed at 2952BC) down to 902AD. 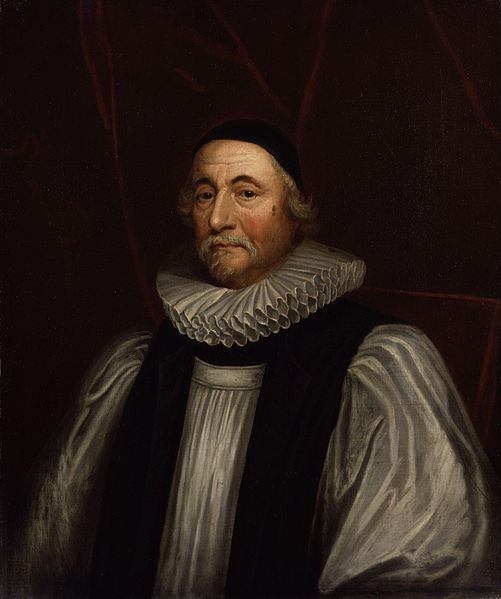 The dating of the Flood and other biblical events was something which was much on people’s minds in the 17th century. The most famous was that of James Ussher, Archbishop of Armagh, who placed the creation of the Earth at 4004BC (four thousand years before what he believed to be the actual birth of Christ). He also believed that the Earth would end in 1996AD, thus having the six millennia of the Earth’s existence matching the six days of its creation. Although Ussher’s chronology is the most well known today, in fact he was only one of several scholars throughout history who tried to figure this out. For example, the Venerable Bede (the man who invented for the Western World the concept using AD to depict an absolute year, rather than going by “the Nth year of Foo’s Reign” or similar) gave a date of 3952AD for creation. Most other scholars who examined the biblical record gave similar dates, so it’s odd that the Four Masters differed quite significantly. Although their history begins at “The Age of the World 2242”, they give the birth of Christ as the year 5194 – over a millennium away from Ussher’s date. Where they got this number from is unknown, but it sets a suitable tone for the epic scope of their first volume.

Fintan mac Bóchra, the only survivor of the first settlers of Ireland.

The first event recorded in the Annals takes place, as noted, in the year of the world 2242, and in fact details the arrival of the first people in Ireland “Forty days before the Deluge”. This comes from a story in the Book of Invasions, Ireland’s oldest history, that the first people to arrive in Ireland were led there by a woman named Cessair, the granddaughter of Noah. Her father Bith was denied a place on the Ark by his father, so his daughter advised him to build an idol and pray to it, which he did. It told him to build a boat, so he and two friends named Ladra and Fintan built a boat and sailed off with Cessair and fifty other women. They landed in Ireland and split up, each taking a share of the women (including Cessair) as wives. However first Ladra and then Bith died, and Cessair died of a broken heart at the death of her father. Six days later the Flood arrived and killed all those remaining, except Fintan who was cursed to transform into a salmon until people came to Ireland again to hear the story of how he tried to escape God’s judgement.

The next event in the annals falls 278 years later, and tells of the arrival of Parthalon (who, as we learned in a previous article, landed near Ballyshannon). The annals then follow the events of the Book of Invasions, with Parthalon’s people being invaded by the Fomorians. The Scythians managed to hold the Fomorians at bay, but in the end their entire population succumbed to plague. The Fomorians held the land uncontested until the arrival of another Scythian, Neimhidh in 2850. Neimidh led a third group, known as the Nemedians, who would vie with the Fomorians for the next few hundred years. The Fomorians were led by Conainn, who was of a semi-divine nature and who lived in a tower on Tory Island. Eventually the Nemedians (who had been enslaved by the Fomorians) managed to destroy the tower and kill Conainn, but the retaliation of his lieutenant Morc led to them fleeing Ireland, leaving it empty once again. Two hundred years later their descendants, the Fir Bolg (or “People of the bags”) returned to Ireland. Forty years later, in what the Masters record as the year 3303 since the world’s creation, the Tuatha De Danaan land in Ireland. The Annals then give a chronology for the stories of the Tuatha, giving, for example, Nuada’s maiming as 3330, Lugh Lamhfada’s death as 3370, and so on until the Milesians (the Celtic ancestors of the modern Irish) arrive in 3500. The Annals detail the defeat of the Tuatha, and then fall into a long period of listing the death of kings, occasionally hanging an ancient legend on a date. It is, in fact, much later that they begin to interest us again. 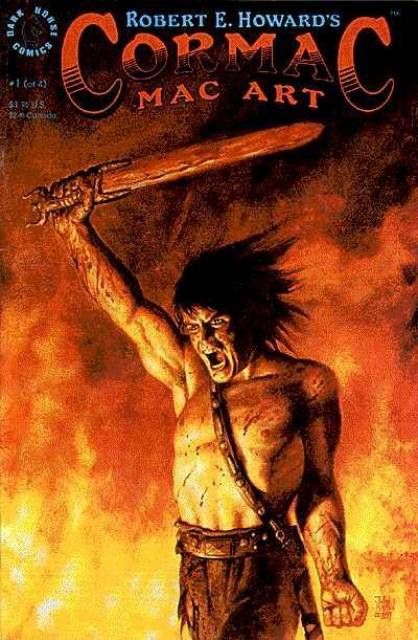 In the year 5194 the Annals moved from “The Age of the World” to “The Age of Christ”, and with that move the Annals begin to show a spark more activitiy than simply recording the names of kings. Battles begin to be described – in 226AD, for example, a king named Cormac mac Airt comes to power, grandson of “Conn of the Hundred Battles”. In 240AD, Cormac conquers Scotland, in 241AD his family are massacred by the King of Leinster. Cormac would go onto lose an eye in battle but survive, only to die after forty years as king when he choked on a salmon bone. The Annals tell us that this was a result of a curse the Druids placed on him in retaliation for his conversion to Christianity (although this was some 200 years before St Patrick). Perhaps it was the fact that Cormac was also responsible for the compilation of the first history of Ireland that led to him getting so much coverage in the Annals, however. From here on the Four Masters had much more to draw in, and indeed the 3000 years they have covered so far are only the first third of this first volume.

The ruins of a church founded by St Fechin, who died in the Buidhe Connail.

Of course, not all the oddness in the Annals is in the prehistory. It details, for example, the battle over the corpse of St Patrick, as each king wanted the honour of burying the great man, and of how God sent an illusion of the body to each of them so they departed in triumph, only to have it disappear when they had got home.  In the year 664AD they detail an eclipse of the sun (an event which was apparently, and unusually, total throughout Europe as several histories mention it). They also talk of a great plague that they call the Buidhe Connail. Buidhe means yellow, and Connail has sometimes been taken to mean Tir Connail, as Donegal was historically known, so it is thought that this may refer to some disease with jaundice as a symptom that first struck in Donegal. Two hundred years later Loch Lephinn turned to blood. Earlier, in 755AD the bishop of Kildare was killed by one of his priests as he went from the sacristy to the altar, “from whence it arose that ever since a priest does not celebrate mass in the presence of a bishop at Kildare”. In 684AD, there was both a plague of animals that left “not one out of the thousand” alive, and a winter so severe that the sea between Scotland and Ireland froze. In 767AD there came great thunder and lightning and a plague of fear, called (for some reason) “the fair of the clapping of the hands”. In 887 AD they tell of a mermaid, one hundred and ninety five feet in length, cast ashore in “the country of Alba”.

The signatures of the Four Masters.

So it goes with history – the truth becomes impossible to separate from legend. The Annals are a valuable historical source, and the date of their writing (less than thirty years after the Nine Years War) means that they have a great deal of accurate information. The four friends set themselves a great challenge, to compile all the histories of Ireland, and while we may mock (fondly, of course) some of what they chose to include, still it is better for us that they did, for otherwise we would not have read it. Perhaps in a future article I may dive into the annals again, and tell of some of the strangeness of later years, but that shall wait for another day. For now, let us raise a toast to the Masters, who gave to us later generations the great gift of knowledge, which is never to be spurned.

2 thoughts on “Annals of the Four Masters – Four Men, Four Years, and Four Millennia of History”