“The Battle of Towton”, by Richard Caton Woodville.

We know surprisingly little of the battle that ended the first War of the Roses.  There are several reasons for this, but the most accepted one is that the eventual victors of the final War of the Roses had little interest in promoting and preserving a victory that was not theirs. In addition, it falls within the end of the pre-Renaissance period, and the Victorian view of history (on which our modern view is based) preferred to view English history as beginning with the Golden Age of Elizabeth I. But perhaps the most compelling reason is that it was too painful to recall. Englishman fought Englishman, and by the end of the fighting, twenty-eight thousand men – around one percent of the total population of England at the time – would lie dead. As with all civil wars, the wounds would take generations to heal. Perhaps trying to forget the carnage made it easier. 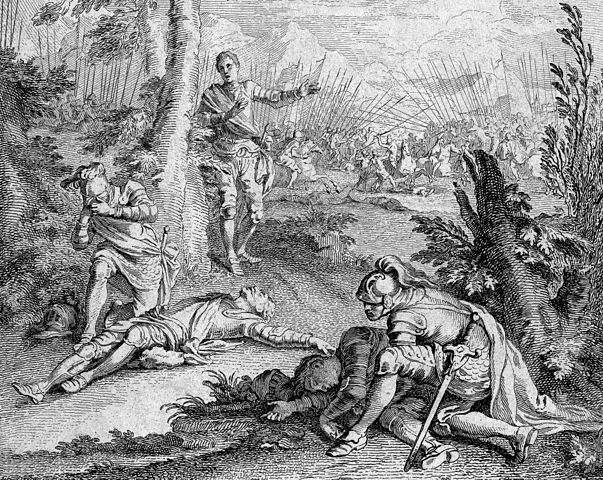 As a result of this, a lot of what we know about the battle is based upon archaeological evidence, rather than written accounts. Even that is a matter of intense debate. Tim Sutherland of the University of York, for example, makes a compelling case that a lot of the real fighting took place the day before, at the battle of Ferrybridge, and Yorkist propagandists played up Towton as their decisive victory, to lessen their loss at Ferrybridge. As with so much of history, there’s no real way for us to tell the truth of what happened. As such, everything I say here will have to be taken with an even larger grain of salt than usual. If it seems that what I say favours the Yorkists, remember that the victors write the history. With that said, let’s review the participants.

“The Earl of Warwick’s Vow Previous to The Battle of Towton”, by Henry Tresham

The armies that faced each other at Towton were the combination of all the forces that had been fighting back and forth for the previous few years. The Yorkists were, of course, led by the young Edward IV. A ferocious combatant, he led his men from the front and that would prove decisive in the fighting. At his side was Warwick, the man who had led him to the throne. Warwick had been wounded at Ferrybridge, but is legendarily supposed to have slain his horse so that he could not retreat, then vowed “Let him fly that will, for surely I will tarry with him that will tarry with me.” This is probably apocryphal, but it makes for a good story and a striking image. Also among the Yorkists was William Neville (titled Lord Fauconberg) a former Lancastrian who had changed sides to join his nephew, Warwick. William was a noted strategist and had become notorious for his exploits harrying enemy ships in the channel.

Across the lines, the Lancastrians were led by another turncoat, Sir Andrew Trollope. Ever since Trollope had betrayed the Yorkists at Ludford Bridge, he had served the Lancastrians as a master strategist. Yet while he set the strategy, he was not of high enough rank to formally command. That fell to the Duke of Somerset, a member of the Beaufort family and commander during the Battle of Wakefield when Richard of York had been defeated and killed. Henry VI was not at the battle – he, Margaret and the young Edward would spend the battle in York, well behind their lines. Two notorious Henries who were in the Lancastrian ranks, however, were Henry Percy, who had attended the Parliament of Devils and commanded the centre at Wakefield, and Henry Holland, the Duke of Exeter. Henry Holland was the great-grandson of John Gaunt, and could have pushed a viable claim to the throne himself, but his reputation for violence and unpredictable temper left him with little political capital. He had served as Constable of the Tower of London, and was well known for his penchant for torturing prisoners.

“The Battle of Towton”, by Graham Turner

It was a freezing cold day on the 29th March, 1461, when the two armies met. Snow was falling, and the wind was blowing towards the Lancastrians, which is reported to have had a decisive effect on the traditional exchange of arrows. The Yorkists all found their mark, while the Lancastrians fell short. Legend has it that when the Yorkists ran out of arrows they simply walked forwards and plucked the Lancastrian arrows from the ground, firing them back at them. The arrow fire had the desired effect, driving the Lancastrians from the defensive positions they had established, and out into the open in a charge. As they stood for the charge, the Yorkists came under attack from a flanking force. The left wing wavered, and nearly broke, but Edward personally took charge and rallied his men. The battle then broke down into a slogging immobile hand to hand fight that lasted for hours, with the Yorkists gradually being forced back. The Lancastrians could not manage to break them, however, and soon the issue was rendered moot by the arrival of a separate Yorkist force sent by the Duke of Norfolk. It attacked the Lancastrians in the flank, and turned the tide of the battle. The Lancastrians continued to fight, but by the end of the day their order had broken down, and they routed. The Yorkists pursued, as an order to give no quarter had been given before the battle. The bodies found by archaeologists in mass graves dug after the battle bear testimony to the ferociousness of the troops, with multiple wounds, any one of which could have proved fatal, found upon the corpses of the slain.

“Towton 25”, one of those who died at Towton and were recovered by archaeologists.
The damage to the skull, some of it inflicted post-mortem, speak to the viciousness of the assault that took his life.

Edward swiftly capitalised on his victory. He attainted all those who had died fighting for the Lancastrians as traitors, returning their estates to the crown, while offering those who had survived an amnesty in return for swearing loyalty. In a stroke, Henry’s army was utterly dissolved. He, Margaret and Edward were forced to retreat to Scotland. Within a year, all the remaining Lancastrian resistance had been crushed, and England had an undisputed king once again. In the end, however, this would prove nothing more than a lull in the fighting. The Wars of the Roses were far from over.

1 thought on “Blood On The Roses – The Battle Of Towton”