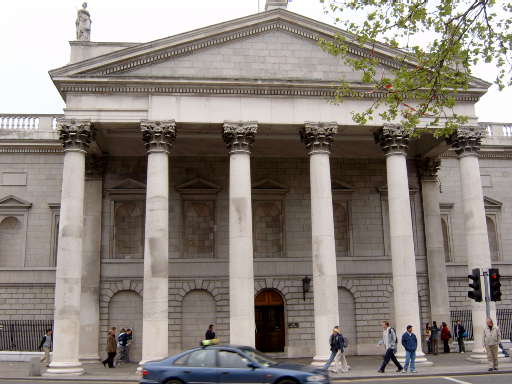 Despite being driven from the British mainland, Richard of York began 1460 in a surprisingly strong position. He had solid backing from the Irish Parliament – and since the sole responsibility of a Parliament in those days was the matter of taxation, that put him on a firm financial footing. His ally Warwick’s control of Calais gave them dominance over the English channel – allowing them to actually meet to discuss plans, allowing them to land on the coast to distribute propaganda, and even allowing Warwick to influence rich London merchants, turning the largest city in England to the Yorkist cause. 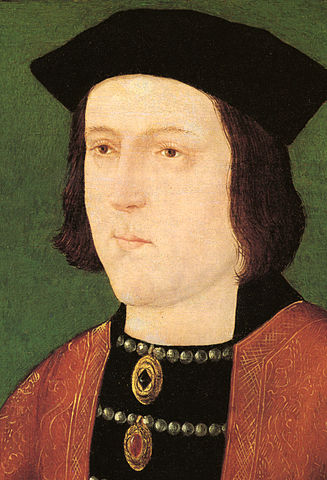 York needed all of these advantages, however, because having suffered attainder as traitors, both he and Warwick as well as his son Edward had no choice now but to fight. Edward was eighteen now, and he accompanied Warwick in June of that year when they landed in Sandwich. They had already raided it several times, as the Lancastrians attempted to assemble a fleet to invade Calais, but this time rather than burn or steal the ships and depart, they pressed their advantage and turned it into a full-scale invasion. The groundwork laid with the merchants of London bore fruit, and the city was opened to their army. The King was at Coventry, and he and his small army moved to Northampton to take up defensive positions. They were outnumbered two to one, but still refused to negotiate – Warwick sent an envoy, but was told that if he came to treat with the King he would be killed out of hand. Undeterred, Warwick attacked the King’s army on the left flank, where the defenders (soldiers serving under Lord Grey of Ruthin) laid down their weapons and allowed them to pass. This was the result of a secret deal made with Warwick – Grey would later be made Treasurer of England by the Yorkists. This treachery allowed the Yorkists to strike directly at the Lancastrian camp. The King’s commanders fought to try to allow the King time to escape, but they were all killed – including their commander, the Duke of Buckingham. The King was captured and brought back to London. 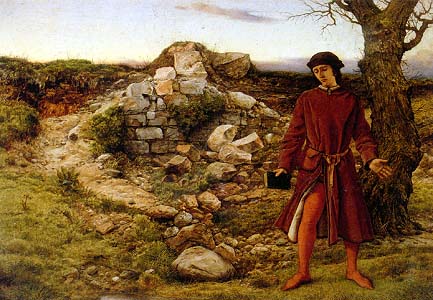 King Henry VI of England at Towton, by William Merrit Chase.
This painting expertly conveys the passivity of Henry at this time – the greatest battle in English history is taking place, but he is standing alone in a field.

York had not even landed in England at this point. In September he finally arrived from Ireland, and made a great triumphal procession to London, under the banners of the Royal Arms of England. This signalled clearly his intention to take the throne. When he reached London he took up residence in the royal palace, and entered Parliament with a sword borne upright before him, possibly signifying his rule by force of arms. The attainder on York and Warwick had already been repealed by Parliament a few days earlier. Regardless, the reception he met was more frosty than he expected. He may have hoped that he would be greeted as was Henry Bolingbroke sixty years earlier, with an acclamation as King, but instead the Archbishop of Canterbury asked if he had come to see the King. Richard was not impressed. The following day, he tried to have himself legally recognised as King, but he lacked the support to get this passed. Instead, a compromise was reached – the Act of Accord. Henry was still King, but it was agreed that his seven year old son (also named Edward) was to be disinherited, and Richard would be made Prince of Wales and heir to the throne. With the king held under house arrest, Richard was now legally in charge of the country. 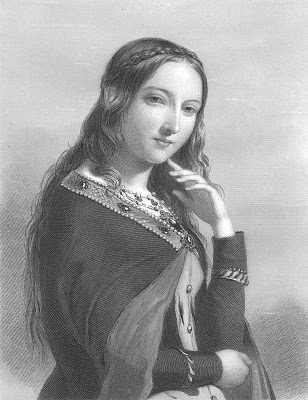 Margaret of Anjou.
Illustration from a Victorian book of Shakespearean female characters.

This wasn’t the end of the war, though. Queen Margaret was still free, and in Scotland she made an alliance with Mary of Guelders, the Burgundian wife of James II. James had died earlier that year, and Mary was serving as regent for her young son, James III. Mary provided support, in exchange for the town of Berwick-upon-Tweed. The town, which stood on the border between England and Scotland, had often been traded back and forth in this manner depending on which of the two countries needed a favour from the other. With this army and her own supporters, Margaret was able to seize a large area of the North – including Richard’s own home town of York. Despite the fact that winter was upon them, Richard was forced to respond. He began marshalling troops, but he underestimated the size of Margaret’s army, and marched north with a force of 8.000 versus her 15,000. On December the 21st, York arrived at Sandal Castle, on the outskirts of Wakefield. 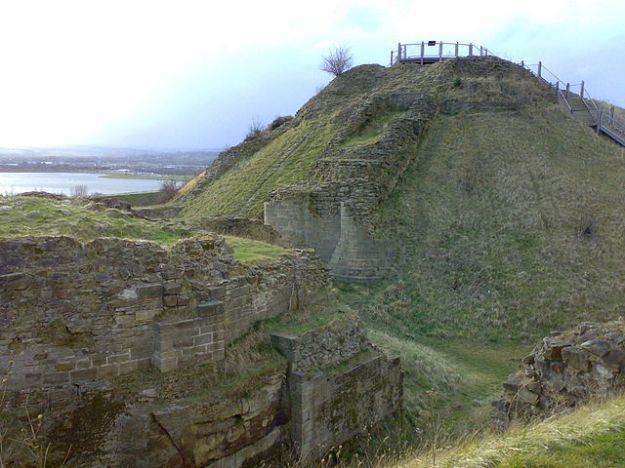 The ruins of Sandal Castle today.

What happened next is unclear. Some stories state that York sallied forth in an attack on Margaret’s army, possibly in response to a trap laid by the general Andrew Trollope. Others say that the armies had agreed to have a truce over the Christmas period and to resume hostilities on the 6th of January, but that when an opportunity arose to attack the Lancastrians violated the truce. Yet another simply says that Richard was out foraging for supplies, and was unlucky enough to encounter a superior Lancastrian force. Regardless, he was involved in some form of fighting, and his force was cut off from the castle and surrounded. He was killed in the fighting. His seventeen-year old son, Edmund of Rutland, tried to escape but was chased down and killed. Several other prominent Yorkists perished in the defeat. Richard and Edmund’s heads were removed, and they were displayed above the gate of the city of York. Famously, York’s head is said to have borne a paper crown and a sign saying “Let York overlook the town of York”. So perished the man who had seemed to have the crown within his grasp only two months earlier. 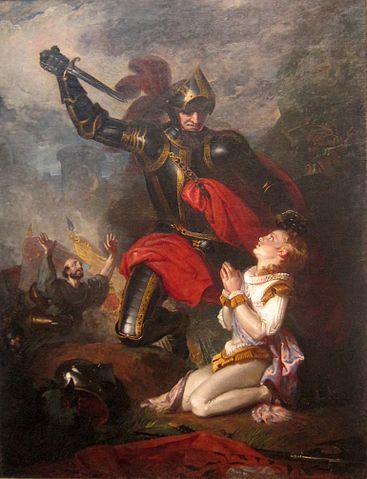 “The Murder of Rutland by Lord Clifford”, Charles Leslie, 1815.
In Shakespeare’s play (which this painting is based on), Rutland is portrayed as much younger than he was in reality.

Margaret didn’t rest upon her laurels. She immediately gathered her troops and began to march south to London, to eliminate Warwick and Edward. Her army looted as they went, perhaps driven on by the Scottish contingent who had a long tradition of bloody raids into English territory. Warwick moved to stop her at St Albans, but poor weather and a failure to adequately protect his flanks led to him being outmanoeuvred and defeated. Ten thousand of his men were killed before he managed to retreat, and left behind was his most valuable prisoner, King Henry. The King was suffering from a bout of madness, and reportedly spent the battle singing under a tree, guarded by two knights (Sir Thomas Kyriell and Lord William Bonville) who had sworn to let him come to no harm. After the King was recovered by the Lancastrians, and despite the King’s pleas for their lives, Margaret had them both killed – allowing her seven year old son Edward, the one-time heir to the throne, to choose the manner of their execution. 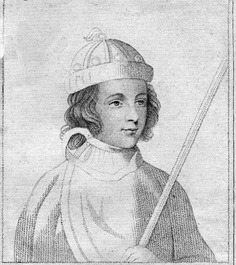 Edward of Lancaster.
In later years it was said of him that he “talks of nothing but cutting off heads or making war”

Bolstered by this victory, Margaret’s army continued cutting a bloody swath southwards until they reached London. There, however, the stories which had preceded them led to the gates being barred. This, combined with the news that Edward, son of York, had crushed their Welsh allies at Mortimer’s Cross, killing Owen Tudor and driving his “royal by association” sons into exile, led to Margaret retreating to fortify her position. Unfortunately for her, this meant that a large portion of her Scottish troops deserted with their booty, heading back up to Scotland. Edward, meanwhile, travelled to London where Warwick had him crowned as King Edward IV, with the justification that by killing Richard the Lancastrians had broken the Act of Accord and forfeited their right to the throne. The stage was now set for one final showdown. It would be the bloodiest battle in the history of England.