In the summers of 2011 and 2012, there were fires burning in London. Sparked by the youth, they forced the country to re-evaluate how they saw themselves, and led to events that people would not before have thought possible. Of course, the fires were different in purpose, cause and effect. But could the havoc of the first have inspired the harmony of the second?

While listening to the Overthinking It podcast about the Summer Olympics Opening Ceremony, one podcaster commented that each country’s opening ceremony was an expression of what they felt they needed to prove to the world, which struck a chord with me.  The 2011 Riots (possibly the worst civil disturbance in 30 years) left the UK with a lot to prove to the world. The spark that lit this fire was the death of a young man in Tottenham, in the north of London, in an arrest gone wrong. Peaceful protests at this action degenerated into violent ones. Copycat riots broke out across the country. The final toll, over three nights and over a dozen cities – 5 dead, 16 injured, £200,000 in damages, and a nation’s view of itself shattered. Rioting in the streets wasn’t something the British had thought themselves capable of – not outside of Northern Ireland, anyway. Ironically everything that people proposed as solutions to break up the riots (rubber bullets, water cannon) that were denounced as “insane overreaction” was generally something that was standard operating procedure in the North. But at least there the violence had a known, predictable cause. Here, it seemed as though a large section of society had simply decided to run amok.

The root cause of the riots is still a matter of huge debate, and not one that I feel is pertinent to this discussion. Instead I’d like to highlight a few facts and factors involved. One important thing to note is that while rioters came from all age groups, over 50% of them were under 20 years old. The public perception of the riots was definitely that of the youth rising up. Many of the rioters who were interviewed and asked why they were rioting said that it was because they felt they had no future. Recently announced government-mandated university fee increases (more than doubling from an average of £3,375 a year to £8,393 a year) had been seen as denying education to the poor who could not secure such loans, and leaving those who could saddled with debt into their adulthood. Combine that with a culture that constantly advertised the newest and most expensive items and made a glory out of consumerism, and you had people being constantly taunted with things they knew they could never afford. So they reached out and took it – the vast majority of items stolen were designer clothes, jewellery, computer games and consoles.

Another important fact about the riots was the notable absence of race as a factor. The majority of UK riots in the previous fifty years had involved racial tensions in some form or other as a prime driving force, but while the 2011 riots began over a protest about a young black man’s death, they quickly swelled well beyond that. Both rioters and those who came together to protect their communities were from all ethnic groups, as were those community leaders later praised by politicians who did their best to ensure that the violence didn’t spread to residential areas. Of course, this multi-ethnic nature of the riots was immediately seized on by those with an axe to grind, who blamed multi-culturalism for the riots – just as those opposed to divorce blamed divorce for the riots, those opposed to social welfare blamed social welfare, and so on. Still, the popular image of the riots as a multi-ethnic phenomenon remained.

The final factor in the riots that embedded itself in the popular culture was the role of social media. Blackberry Messenger was used by the rioters to communicate and coordinate gatherings in the early part of the riots, while Twitter spread the news of the rioting faster than the traditional media could have managed, and was blamed for the springing up of copycat riots. Users of those services pointed to the fact that the majority of tweets were informing non-rioters of areas to avoid, organising responses to the rioting such as the #riotcleanup phenomenon, where over 90,000 people gathered with brooms and other implements to help remove the debris left by the rioters. Others felt that the political institutions and traditional media who felt threatened by social media were attempting to use this as a tool to try to restrict it. Regardless, in the public consciousness the riots became inextricably linked with social media.

The 2011 riots then – in the public mind, a multi-ethnic group of youths banded together via social media because they felt they had no future. I would argue that the London Olympics Opening Ceremony set out to comprehensively rehabilitate or refute each aspect of that perception, mostly through two specific sections. The two sections in question would be “Frankie and June say…thanks Tim”, the celebration of UK popular culture that occurred at around the midpoint of the ceremony, and the final lighting of the flame itself that formed the finale.

“Frankie and June say…thanks Tim” opens with the multi-ethnic theme front and centre, as a white mother with a mixed race son arrives in a Mini Cooper to a typical suburban house. As images of a family settling down to watch Saturday night television flash up on the screens, we are introduced to the family members, and more specifically June, a young mixed race girl whose social media statuses flash up onscreen with her sister informing us that she is “single”. (Some chose to criticise this sections portrayal of the typical British family as a white woman married to a black man with mixed race children, one paper going so far as to say that it would be impossible to find such a couple. When Olympic gold medals were won for the UK by Jessica Ennis (child of a black man and a white woman) and Mo Farah (a black man married to a white woman), leading to them being hailed as national heroes, very few people missed the irony.)

The segment continues, with crowds of dancers waving mobile phones aloft, followed by segments from TV programs celebrating the idea of a family dining together. We then see June and her sister leaving the house for a night out, overlaid by more clips from TV shows, this time on the theme of parents chastising their daughters for heading out in short skirts and scandalous attire. As they run out we are introduced to our other protagonist, Frankie (a young black man played by a Portuguese immigrant), while he posts a picture of himself and his ethnically diverse friends to a social media website. People dance while computer imposed speech bubbles of their status updates and tweets follow them around and more photos with captions flash up on screen. As Frankie and June catch sight of each other across a crowded dance floor, and more appropriate music and TV clips play, June is swept away, leaving Frankie bereft – until he notices that she has left her phone behind.

More music plays, sweeping through the history of British popular music, as dancers form shapes on the stage, jetpacks and pogo stick-riding bobble headed punks make an appearance, and Frankie contacts June to tell her that he has found her phone. The two exchange messages, finally meeting and kissing with a collage of famous kisses from popular media playing on the screens behind them (including the first lesbian kiss broadcast on British television, which as a result of this became the first lesbian kiss broadcast in several other countries around the globe). As the two kiss, June’s status is shown updating to “In A Relationship”. More music plays, before the house at the centre of the staged is raised to reveal Sir Tim Berners-Lee, the British man who invented HTTP and created the world’s first ever website. He live-tweets “This Is For Everyone”, as the segment ends. 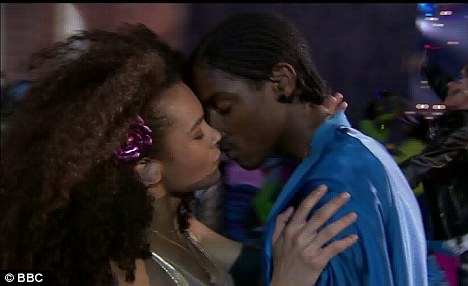 It’s pretty clear how this segment shows multi-culturalism and social media as positive influences on people’s lives. Not only the relationship at the heart of the segment, but the friendships of those involved are shown as being enhanced by interaction over social media, while the casting of a mixed-race girl and an immigrant as the leads stands as a retort to those who would regard both things as a dilution of what they think of as Britishness. More subtle, though, is the integration of today’s youth into youth down the years. As the music moves through the history of British popular culture, the dancers change costumes, morphing into their modern incarnation. We’re reminded that “the youth” are not a separate entity, but rather are us as we once were.

But what about the idea that the youth of today have no future and no hope? Danny Boyle’s refutation of that idea lay at the heart of the culmination of the ceremony – the lighting of the flame. Over the previous weeks, the main question that people had been asking was “who will light the flame?” Several people had been suggested, but the answer was one that few had expected. Seven teenagers, each a promising young athlete nominated by a famous British Olympian, carried the torch in a lap around the stadium before lighting the flame. The symbolism was explicit, the passing of the torch from one generation to the next, and the message was unmistakeable. The youth are not a threat – the youth are the future. 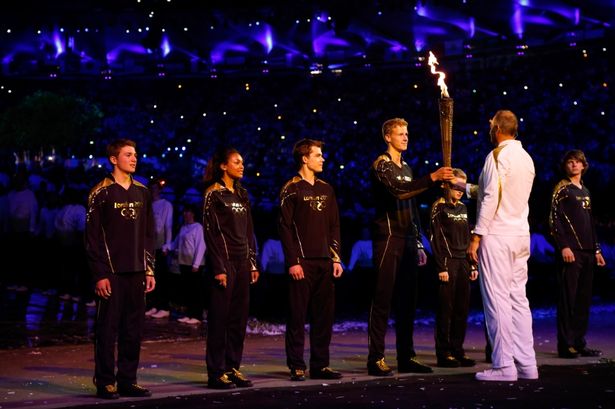 But how successful was this ceremony, with its mission to “inspire a generation”? Almost immediately, it transformed a nation that had previously regarded the games with cynicism (to the extent that there was a popular BBC comedy series entirely devoted to mocking the preparation for the Games) into one filled with hope and optimism. Those who tried to decry the opening ceremony for promoting racial integration soon found that people were not afraid to call them out. And the optimism seemed to pay off, as Team GB did better than it had done in the previous century of Olympics. As if to spite those critics, the ultimate British hero of the Games was Mo Farah, winner of the 5,000m and 10,000m races, a black Muslim child immigrant from Somalia.

Will this spirit of optimism last? Only time will tell. But for the moment, the flames that burned London have been forgotten, thanks to the flame that it inspired.