Anne Neville, the Kingmaker’s daughter.
One day she would be Queen.

The alliance between the Lancasters and the Earl of Warwick was formalised in December 1470, when the young Prince Edward Lancaster was married to the Kingmaker’s daughter Anne. Anne had previously been the subject of a major disagreement between King Edward IV and his younger brother, Richard of Gloucester. Richard had wished to marry Anne, but his brother had forbidden it, fearing that it would give her father too much power. This was the same reason he had forbidden his brother George from marrying Anne’s sister, Isabel. Unlike George, however, Richard remained loyal to his brother, and Anne had accompanied her father into exile. Her wedding sealed the union between the two parties, and sent a signal that Warwick’s support of the Lancaster claim to the throne was now absolute. George, who had abandoned the Yorkist cause on the understanding that his new father-in-law would support his claim to the throne, cannot have been happy. Still, he remained loyal to Warwick, and thus to the Lancasters. He had little choice – they had already reconquered England.

Earlier in 1470, Warwick had decided to re-use a ruse he had tried before, fomenting rebellion in the north of England to draw the King away from his centre of power. This worked, since the King could not let rebellion go unchallenged, and Warwick and his nephew Thomas (a notorious pirate known as the Bastard of Fauconberg) landed a fleet in the south and occupied London in October of 1470, restoring Henry VI to the throne. Warwick’s brother John, who had remained in King Edward’s service, was leading an army on the Scottish border at the time and switched allegiance to the Lancastrians. King Edward thus found himself trapped between two forces, and was forced to flee the country. He made his way to Holland, and from there to Burgundy, a dukedom of France that had been asserting its independence. His sister Margaret was married to the Duke of Burgundy, and so he was able to find shelter there. For the moment, however, England once again had a Lancaster on the throne.

Margaret of York, wife of Duke Charles the Bold and sister of Edward IV.
Her brother let her choose who she married, and she repaid him by saving his life and throne.

Edward’s presence in Burgundy was a threat to the Lancasters, of course, and Warwick took advantage of the tension between the Duke of Burgundy and the King of France (his nominal overlord) to persuade France to declare war, with English support. This was supposed to strengthen the Lancastrian position, but in fact it did the opposite. The canny Duke Charles of Burgundy had been reluctant to lend his aid to Edward, but this new situation made it to his advantage to see Henry VI removed from the throne of England. He lent Edward enough troops and money to allow him to land at Ravenspur, on the coast of Yorkshire – ironically, the same place where Warwick had raised rebellion to divert him. This time, however, the locals welcomed him back, and the city of York threw open its gates for him. He claimed at first that he had only returned to claim his dukedom of York, but as he marched south and lords loyal to him flocked to his cause, it became clear that this was only a pretext. Even his brother George decided to return to the fold. Edward marched into London unopposed, and captured Henry VI. Warwick had been leading a force on his tail, and had hoped to catch him against the city walls, but London;s acceptance of Edward left him in a strong position, and he was able to turn and meet Warwick’s army with support at his back. The two met north of the city, at a small town named Barnet.

“Imagining of the Battle of Barnet”.
Illustration from an 1885 history of the Wars of the Roses.

The Yorkist army was led by Edward, who once again took personal command of his forces. His brother Richard also took to the field – at 18, this was his first major battle. Opposing him were Warwick himself, his brother John (the same one who had turned on Edward the previous year), John de Vere (the Duke of Oxford) and Henry Holland, the notoriously vicious Duke of Exeter. The weather was misty, and the two armies misjudged their positions, leaving themselves misaligned. This allowed the Duke of Oxford’s forces to easily rout their Yorkist opponents and drive them from the field, however as they returned the forces of John Neville mistook the badge of Oxford (a “star with rays”) for that of Edward (a “sun in splendour”) and attacked them. Oxford’s men didn’t trust Neville’s men, who had turned to Lancaster only a few months before, and they immediately decided that they had turned their coats once more. The cries of treachery spread down the Lancastrian lines, causing confusion and disarray, and in the general scrum John Neville was killed. Seeing his brother die, Warwick ordered a retreat, and Edward pursued. He had given an order for Warwick to be taken alive, but despite this Yorkist soldiers killed him and stole his gilded armour. Oxford escaped, while Henry Holland was captured. 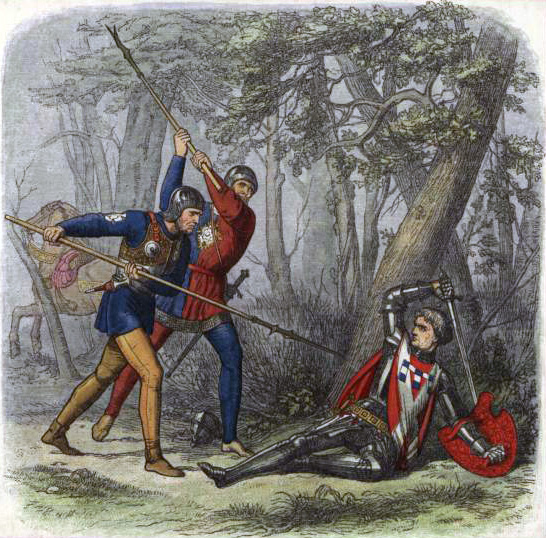 “Death of the Kingmaker”, by James William Edmund Doyle, 1864.

Edward had little time to rest on his laurels, however. The same day as the Battle of Barnet, Queen Margaret and Prince Edward landed in England and met up with a Lancastrian force in Devon. They marched towards Wales, hoping to join up with the Tudor forces there, and Edward pursued. At Tewkesbury, in Gloucestershire, they caught up. The Lancastrian forces were mostly on foot, while Edward’s forces were mounted infantry, and so his troops were relatively rested for the battle. This offset the fact that the Lancastrians slightly outnumbered the Yorkists. The Yorkists had superior missile weaponry, and forced the Lancastrians to attack, at which point a small force of spearmen stationed in ambush attacked them in the flank. This routed the army on the flank, which was led by the Duke of Somerset, Edmund Beaufort. Legend has it that he rode back through the army to Baron Wenlock, who was commanding the centre, and accused him of failing to support him before killing him. Regardless of the truth of this, the Lancastrian forces collapsed and fled. Prince Edward, who had been in the centre with Wenlock, was caught by some men loyal to George, Edward IV’s brother. Despite the fact that George had sworn allegiance to him just the previous year, he had him summarily executed on the spot. 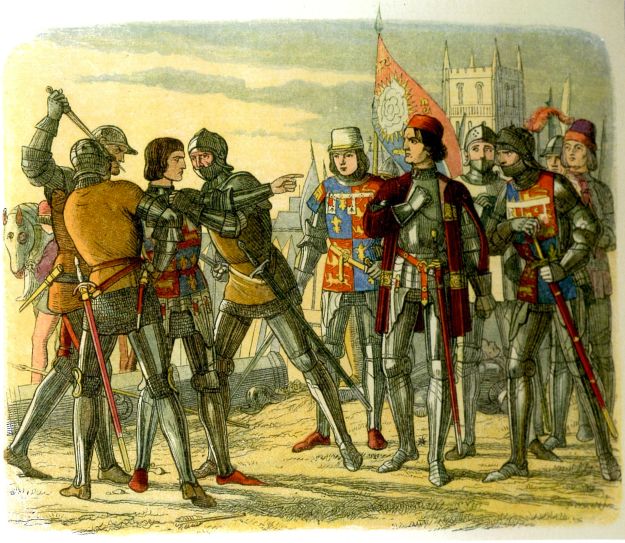 “Murder of Edward of Lancaster”, James Doyle, 1864.
As befits his propogandizing purposes, Shakespeare portrays the vicious young prince as a noble youth, and has all three brothers participate in his killing with Richard leading the way.

The death of Prince Edward effectively ended the Lancastrians as any kind of threat. The Bastard of Fauconberg still led a considerable army, as did the Tudors in Wales. Fauconberg attacked London, perhaps hoping to seize Henry VI, but failed to take the city, and retreated back towards the coast. Here, he surrendered to King Edward’s forces. Henry VI died shortly afterwards – reportedly of “melancholy”, but almost certainly killed on Edward IV’s orders, now that his death would no longer served Prince Edward’s cause. Queen Margaret surrendered, her son’s death having broken her. She was imprisoned in the Tower of London briefly, before being sent back to France where she lived out her days in seclusion. Henry Holland, the Duke of Exeter, was also imprisoned for a while before he swore allegiance to Edward. He was sent to France to lead an army there but drowned while crossing the channel – almost certainly thrown off the boat at Edward’s orders. Anne, the daughter of Warwick, who had been married to Prince Edward – married Richard, as he had wanted several years before. George attempted to stop this, as his marriage to Isabel left him Warwick’s heir, and he hoped to control Anne’s inheritance as well, but Anne and Richard were able to outsmart him. In 1478 George was accused of conspiring against his brother, taken to the Tower and privately executed – according to rumours at the time, by being drowned in a barrel of wine. Apart from these incidents, however, the years after the Lancastrians were crushed were peaceful ones, both for England and for the House of York.  Then in 1483 Edward IV died, and everything went to hell.